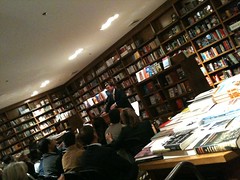 Today is the first day of the ‘blogging challenge‘ that’s run by a wonderful woman that I encountered about…errr…I think it’s been five years ago now, called Cricket Walker (she teaches SEO on Yahoo and is an amazing resource – share the love, k?).  And I was all for the whole thing – I mean, how difficult can writing a blog a day for 30 days be?

And I don’t like to be negative, but I AM being realistic – 30 days of blog posts, on a blog that was long since fragmented from what it used to be – a special needs daughter, a son who will start high school soon – a small business in the UK and another one in the process of being designed and set up (one is copywriting and webdesign, the other is my ‘publishing’ stuff) to go along with the book that’s due with my editors in June.  And I’m a full time Uni student.

And THEN – I had to decide what I was doing with this place.  But I have a cunning plan.
I’m going to blog here every day – but I’m also going to post to other blogs, and run the information on them as asides (which means new template for this place, woohooo!).  As for what I’m going to talk about….I have NO clue.  I’m going to wing it.

And because I’m taking part in the blog challenge that I just mentioned, to introduce myself breifly.  I’m Kai.  I’m infamous in some circles – usually amongst writers it has to be said.  There’s no ‘nutshell’ for me – I’m bipolar, a writer, head injured, a student, a photographer, I design perfume and soaps with aromatherapy products built in, I knit, I sew….I’m getting married in the next few years….there’s so much going on in my life that I couldn’t sum it up in a couple of breaths even if I tried.  I’d make a horrible elevator pitch 😉  So instead I’ll just say ‘hi!!!’ and I hope that I’ll be able to work through the whole problem that causes the ‘non roundup’ and do a proper summation before the end of the 30 days 😉

Blogging for the 30 day blog challenge – you can too!