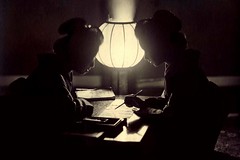 Toys and tools for writers – pt 1

One of the things I’ve noticed is that writers are really into their tools.

I’m constantly looking for something to streamline how I write, when I write, where I write and how easy all the different iterations are to use.

Disclaimer
This assumes a couple of things – that you either own the ‘tech’ listed, can modify the tech you own to work for you – or in the ways I’ve listed, and have no compunction or issue with buying the software if you like what I’m describing.  To be fair, most of the things I use are free, to a point, so you can either try before you buy, they are totally free, or are almost instantly justifiable.  I apologise if my probably cavalier attitude to software is distressing, but in deference to sensibilities and the current economic climate, I’m not exactly rich myself and save for everything I own.  That said….

Advertising disclaimer
All links marked with a bold * are affiliate links.  They go towards supporting the site, but are only used when I can genuinely recommend the product.  In most cases there is a review on the product on one of my sites, or there is a review being moved to one of my sites in the near future.  I manage my affiliate links with a keyword plugin, which is why they aren’t plain text links like the other resources listed.

A computer – laptop, desktop or netbook. Nothing I use needs much memory at its basics, but given the writing world is rapidly becoming an online resource system, so I’d be at least end of life specs (which I believe is XP for Windows and some sort of fuzzy Leopard for Mac  – I know the iPad won’t sync below Leopard).

Dropbox (http://dropbox.com)* – this is a great backup system, and if you click on the link I’ve provided, I get extra space to store my stuff.  And if you *do* sign up, let me know and I’ll give you access to my free ‘chapter samples’ folder – if you’re interested in my books that is 🙂

Evernote – Evernote is a free, always accessible notes system – a bit like Dropbox, you can share and allow others to have access to your notes what I adore about it is I can run it on my iPhone and take snaps, make notes, and store stuff so that I can use it later.  You can also pay a low monthly subscription and extend its features.
Ywriter (http://www.spacejock.com/yWriter5.html) – no frills, very snazzy word-processing system that lets you work in ‘scenes’ instead of one document.  Saves all information in RTF as well, so it’s easy to access in other software.
If you’re selling work, a tracking system such as Sonar (http://www.spacejock.com/Sonar3.html) or
WinSAMM from http://www.sandbaggers.8m.com/samm.htm (please note, this site has been going since I started looking in 2001, and I don’t think the software has ever been updated – up until very recently it was also my manuscript tracking weapon of choice).
Rough Draft is also a great wordprocessing program, again free, again, I don’t know when the last update was, and the site is currently down  🙁
Oom is also free, but is so new to me I haven’t tested it – it’s linked in the resource links at the bottom 🙂

I’ve got three pieces of software that I consider must have, for different reasons.  You can however choose just one – all three work well as a single writing program.

Word or Open Office (free) – the difference between Word and Open Office are now so negligible, that you can’t really tell which a document has been written in, at least till you start importing and exporting between them.  Word however, is not cheap, so if you’ve got a limited budget, I recommend Open Office – I’m listing it in the ‘not free’ however because you may need to procure templates, depending on what you’re writing.

Liquid Story Binder – this has an affiliate scheme, but I’m just posting this because it’s playing up, – http://www.blackobelisksoftware.com/this has been my must-have writing product for nearly five consecutive Nanowrimos, and is my favorite writing software when writing serials.
Scriviner – I love, love love this software. http://www.literatureandlatte.com/scrivenerforwindows/ (that’s the windows link).  Again, it’s not an affiliate link.  It’s great for stand alone stories.

eBook reader or books – The  *Kindle

and the *Apple iPad

are the best two tools, IMO out there, but I’ve got nothing against the Nook, or the *Sony eBook Reader

,  having owned the latter and think the colour screen on the former kicks ass.   Alternatively, you can go paperbacks – libraries are a great way to read serious amounts and save money.  You need, as a writer, to read at least five books a month, in my opinion.  Opinions and mileage may vary, of course, but if you’re not devouring other perspectives, you’ll find it difficult on some occasions to express your own.  And this doesn’t include research books – I’m just talking ‘for fun, to stay on top of the trends of the genre you’re writing in.
BONUS – if you’re targeting a specific press, go all out and read their books – remember though, the goal isn’t to emulate these writers, but to make your writing as compelling as theirs.

Separate from this – Writing Books – like it or not, you’re not a perfect writer.  I’m not a perfect writer.  Getting books that help you perfect your writing style will allow you to be your editor’s and Agent’s darling in later life and give you a real sense of accomplishment.  I’ve been writing for…er…27 and a bit years now, at a guess, and I’m still learning.  I’ve probably done my 10k hours and then some.

Notepad, pens, diary – basically anything you need for organising yourself.
AND – a wall.  This last one I’ll have to explain in a final post.

Next article – the combinations for bloggers, writers, scriptwriters, poets and special uses.

I’m into a lot of things, when it comes to tech. Computer based, I’m PC and through choice – it’s not that I don’t *like* Apple, and it’s not the expense, but that most everyone I support, tech wise, is on a PC. It makes sense that I stay on the PC too.
But when it comes to my phone, my tablet? Apple all the way! I’m an iPhone nut, having briefly toyed with the Android (G1), messed with the Blackberry,worked with one or two of the other leading contenders.  I can’t see myself with anything else to be honest.

And I’ve got an iPad too – in part because it’s one of those things that I’ve wanted since it was announced, but also because it works for me.
But I can’t help but wonder where all this tech leaves us – which I guess I have to explore in more than one post – right now I wanted to touch on something I read in the ‘does bad grammar’ post linked at the bottom of this post.

The idea that we refer to our tech as animate instead of inanimate objects (basically, dropping the ‘the’) or considering our tech as persons rather than things isn’t a new idea.  I view my laptop, my desktop, my phone and my tablet as an extension of me – more importantly, I view them as having ‘personalities’, lives and ‘jobs’ of their own.  It’s not as if I’m arguing sentience for them – I’m not – I know they are tools – but they are tools with emotional investment.  I ‘treasure’ my tech in ways I probably shouldn’t.

I have learned in the last few years to separate myself from my tech – for various reasons I could spend days immersed in tech and felt antsy when I wasn’t online because we were on holiday, because I was in hospital – because I was unable to ‘connect’ for whatever reason – my disconnection from ‘my world’ has ironically faded despite my ‘world’ being more portable.  Now, it’s not quite like that, but like every relationship that has shifted, I’ve grown to love my tech.  It’s kinda like the difference between loving and being ‘in love’.  There’s that depth of relationship with my tech – with the tech I guess – it’s more than being connected to the world, though that facet of it makes the relationship more beguiling, but I know, like everything else, I need some space from it – and the rest of my tech sometimes.

What do you think?  Do you consider your tech as inanimate, or do you have an ‘odd’ relationship with what is, effectively, plastic, metal and a touch of electricity?
Blogging for the 30 day blog challenge – you can too!

by Kai | Jan 3, 2011 | Hosting and Tech, Writing, Free for all, Gaming and hobbies, Language, Personality

So I’ve got a rudimentary schedule for the blog – Monday ‘me’ day – which is information mostly about me. Monday also covers ‘mental health’.
Tuesday ‘tech days’ – I’m going to talk ‘WordPress’, tech (as in iPhone, iPad, laptops, desktops), Wednesday ‘writers’ days, where I talk writing in it’s myriad formats. Thursday I’m going to talk language – I’m a forensic lingustics nut.
Friday is my ‘free’ day, so it might be photog, or something else, and Saturday and Sunday I’m going to talk about gaming and hobbies of all types – tabletop, roleplaying, MMORPGs, indie (classics), old skool…the works. My hobbies include knitting and sewing, so I’m going to explore that too.
January, that means every day there’s going to be something there.  After that, who knows 😉