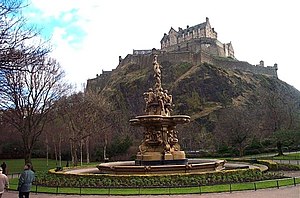 Showing my chops- the Merry-go-round

Or, as my partner and best freind have both pointed said ‘showing just how warped I really am’.

Before we moved to our sunny location in the Cotswolds, my beloved and I were walking along a street in our hometown, looking down into Princes Street gardens. The shed at the back of a merrygoround that had been set up was on fire, but we didn’t know that – and I just suddenly turned to my other half and said ‘what if the merry go round is on fire’.
Another ten steps as we made small talk about how sad that was, then I chirp up ‘oooo…idea for a story…’
He stops and looks at me, then says ‘go on then’.
At this point in our relationship, we had been together for less than a year (it’s coming up on seven years this March!) so he’s just getting used to the idea that he dates someone that writes books, and was currently putting up with me while I worked out some pretty gruesome, CSI level graphic ideas for my detective (Elliot Peters – more about him later).
We’d gotten past the line of sight of the fire, and were walking past the church on the West corner of Princes Street when I started this story, about to cross the road near Bruntsfield place, and head for the bus round the corner from there. It’s about a four minute walk, especially if you’re corralling someone waving and gesturing as enthusiastically as I was.

And I proceeded to tell him this:
“What would happen if a serial killer was storing dead bodies in a frozen food truck, and had saved them all up, before bringing them down into the gardens, sticking them on the merry-go-round and setting fire to it before setting it in motion?’
What would happen is a forensic mess. What actually happened was my other half was backing away from me, at speed, into a plate glass window outside a shop with a look of sheer amazement on his face. He sees a merry-go round on fire and thinks ‘dammed shame, it was painted so nice too’.
I see a Merry go round on fire and think ‘Elliot would have a cow, and forensics would be at it for months…..’

I really should finish that story tho……

Blogging for the 30 day blog challenge – you can too!