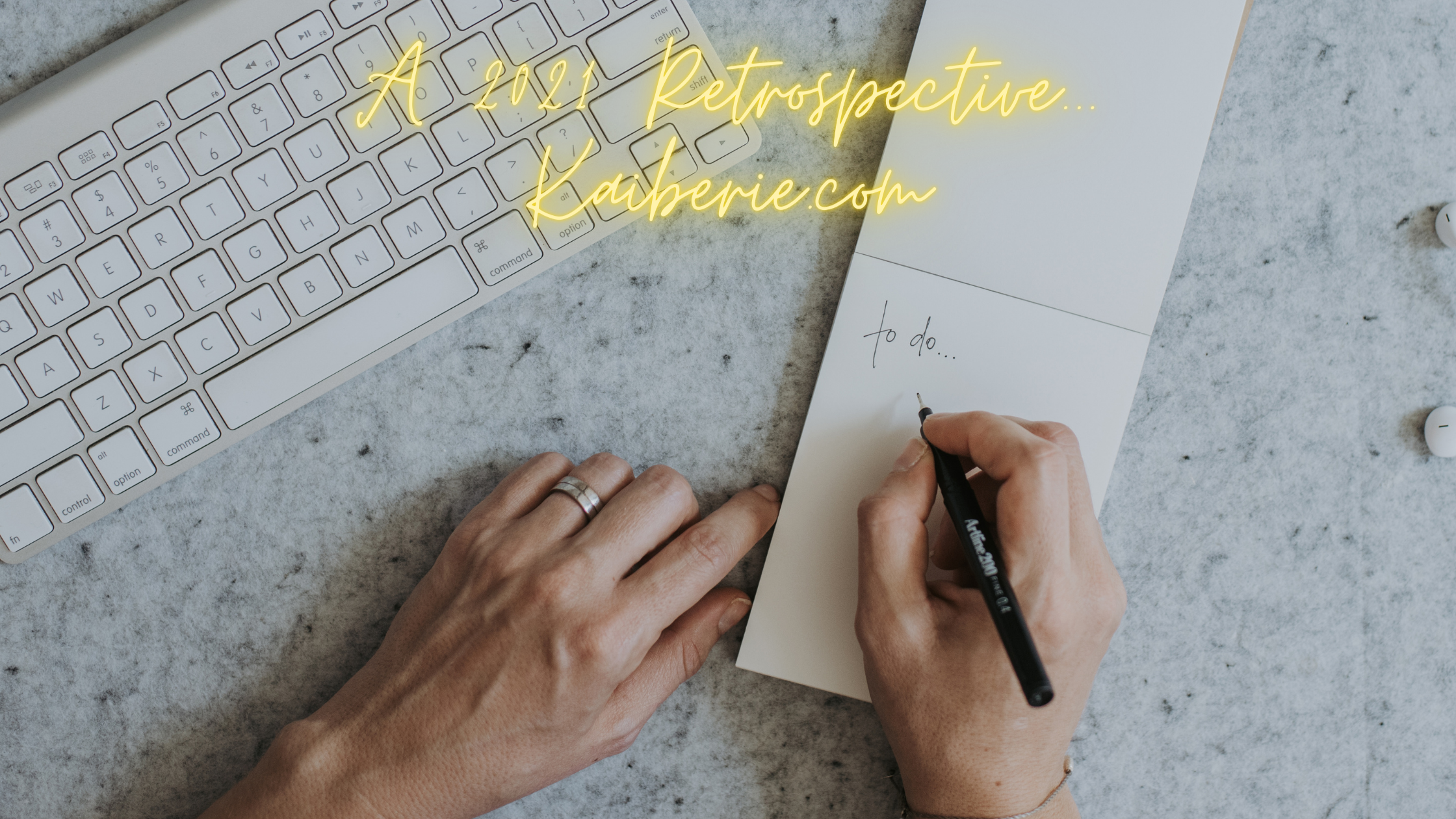 Hi there guys. Normally, doing these, I do really try to get them up either as we’re travelling home on the21st December, but as everyone saw, I posted something else instead. So, I’ll do the retrospective today, and tomorrow we’ll do the ‘coming in 2022’.

I got nothing done…

I think the first thing to acknowledge is that personal goals wise, I’m not further visibly forward, but I did a lot of…I guess it’s ‘behind the scenes’ work. I did have a quieter, calmer year in some ways. Supporting the kids, supporting my partner, and trying to plan for what comes next. I think that though I did very little, overtly, there were a tonne of really great conversations that eventually led myself and my business partner to something we’re working on now, which we’ve tagged ‘AOK’.
Goals wise, too, I didn’t published a dammed thing last year, and only really rebooted this blog about three months ago. I’m still working through how best to handle all of that, if I’m honest, but what I do know is that I’m a lot happier now with most of the things I write, when I write them.
I did start a Substack.
But, because I got ‘nothing’ done, I spent a lot of time with my family. I have regulated my sleep schedule a lot better, though I do sometimes need to switch to LA time to do some stuff, it’s not frequently expected of me. I’m sure next year may change that, but it’s ok. Mostly I’m just grateful for the space to think and spend time with my partner, son and daughter. We bought a Cricut so my daughter and I are still into doing crafty things, we all go out to get photos of stuff, we got to do the UK Games Expo this year…it’s all been really good and really comforting in many ways. None of us have gotten really sick, nor have we caught CV19, but we’re all fully boosted now, and flu shots to boot. We’ve been *very* lucky.

I did lots for clients….

So, I’ve said ‘I got nothing done’ but equally, it’s been an ok year for getting work done for clients. From tomorrow, I’m developing something that cuts back on the clutter for one client so it ‘just works’ and building sites for two others. It’s all looking really solid. I learned Divi a lot more, I’ve been upskilling both for my business and for my uni stuff and I’ve had a lot of fun along the way. I love coding, but I love solving puzzles more.

I think it’s fair to say this year I got on with the rather hard work of starting to heal. I’ve not had an exactly bad life, but I’ve been through a fair few really bad scrapes and my mental and physical health are kinda dented for it. I do totally think I’m dealing with some form of adrenal issue right now, though I’m also quite worried I’m anaemic again, but most of what I did was read, learn, sleep, and just accept that I can’t do everything, or work on starting to accept that. I laid foundations though for this year too – knowing what to do and when to do it hasn’t been the easiest thing for me, but I’m working in advance with a lot of my stuff now and though I sometimes bounce off deadlines, I’ve met quite a few too.
in July, I was discharged from therapy. I’ve done everything I could with them, my therapist was moving on, and instead of getting used to another stranger, given the current pandemic based restrictions, we decided that it was best just to close my file and move on. I can go back if I need to.

And I took up more exercise

Last year, I was just starting Mount Fuji. I completed that and went on to do Giza, Petra, Everest and started The Great Wall of China. In total, I walked about 540km, based on my Fitbit tracking.
I started walking outside by myself too. Didn’t last long, but will be coming back. In November, I went for a Ludosport Discovery session, fell in love with the sport and have now completed enough form 1 training that I can duel, and did for our closing session of the year, winning my team three points. I was rather shocked I managed it. I think everyone else was too, as I often refuse to duel, or withdraw when afraid. I am dealing with a lot more panic attacks though, but we know why and we’re working on that too.

Because I didn’t get to do very much in the way of travelling, I’ve mostly adventured through my books. Which, if I’m honest, has mostly involved serial killers, thrillers and murder mysteries. My Goodreads year in review isn’t *everything* I read (cause I’ve got books I read through Netgalley that haven’t or won’t log yet) but it’s close. If you want to see my year, it’s here, but seriously, a lot of it is basically true crime. 😉 Some of it was also audiobooks, which I count.
I think the two books that stayed with me this year though were The Book of Accidents by Chuck Wendig and we’re currently finishing off Leviathan Falls, which is the final book of the Expanse. And finishing the show too.

I completed both Camp Nanowrimos and Nanowrimo proper this year, and in the end, it turned out that though it felt like I was pulling teeth, I wrote close to half a million in 4thewords, and another 750k in my various files. Not bad going but next year is going to be a bigger challenge. I didn’t publish anything that wasn’t someone else’s to take from me and put out there though.

And yeah, then there was the ‘also watched’

We watched so many good things this year but I watched less in some ways than my family. And more in others. I had more true rime on in the background during the day, but I’ve watched far fewer programs, and have promised I’ll watch a few of the pertinent ones when we’re back at our usual spaces next week.
Outstanding for me though had to be Loki, Scrubs (which we binged to the last season then pretended that one didn’t exist), Elementary, which we’re catching up on, The Expanse…you get the picture. We’ve started watching Titans season 3, The Witcher Season 2, and The Expanse season 6, and we’re looking forward to The book of Boba Fett, Obi Wan and more.

Gaming this year has mostly been about my Switch and our PS5. We’re both having a blast, no pun intended, playing through Fallout 76, though each of us can’t play with each other as it’s not cross-platform. Been playing games on the Switch too, but there’s nothing of note that I’ve played, really. I enjoy Surviving Mars, but a lot of what I do is just play through stuff for a little bit, get listless, put it down. So a lot of my time has just been spent mindlessly shooting things, which I’m kinda good at.

Meditating, self care, religion, oh my

I always leave this bit to last, so if people want to skip, they can.
I meditated almost as much as I walked this year. I’ve found Headspace to be an excellent way of dealing with my sleep issues and the sleepscapes and I have become best buddies during the Pandemic. But we already knew that from listening to the stories Calm put out last year. I decided to stick with Headspace, not Calm in the end, simply because I got on better with Headspace.

I’ve been home to my temple twice this year (which means I’ve been home to family twice this year) and moved my ‘I have to go do something, let’s go to my quiet spot) to a place nearer our current home. It’s not perfect, but it meets most of the needs of what my rules are. I’ve also enacted some pretty radical self-care, but that, and some other stuff will be in the books, in the new Year.

I’m sure I’ve missed tonnes, but I’ll be honest, I’m still not sure this year was actually a full year if that makes sense. Time isn’t right still, not since the interminable but necessary lockdowns, and we’ve been working through as much of being present and grateful as we can, but I’ll also be real about this, a bit of me is still sobbing away in the corner that something so horrible is ongoing.
I may write on that later, but I’m healthy, I’m here, I’ve picked up some new skills and hobbies and though I lost my gran, as a family, we’ve been far more blessed than we could have expected, so really, I can’t complain.

How was your New Year?