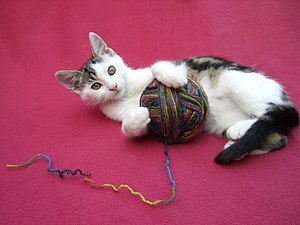 Chris Brogan spoke about this yesterday, quite serendipitously, but I’ve been thinking about it – a lot – myself lately.  What’s the core of my being.  When I remove everything from around me that isn’t dependent on relationships, isn’t dependant on circumstance and isn’t dependant on expectation, what’s left for me?  And only me?

The single strand at the centre of my being isn’t my kids.  They are my world, but they don’t define me.  Just like I don’t define them.  Similarly, my relationships aren’t the single strand at the centre of me, though they are very important, and if we were looking at weaving something from the bits in the middle of me, they’d be one of the foundation threads.  I can’t do what I do without the support of the people around me.  But, if we’re looking at single strands, as defined by Chris, then it’s something internal, not external.

At first…
At first I thought it was blogging – after all – that’s who I am.  I blog.  Except, it’s not.  Not any more.  I spend more time copywriting than blogging writing by a factor of about ten to one.   It’s still a core of my  being, but it’s not *the* core.  It’s not the element at the center of me, as much as I wish it was.
And then, I looked into whether it was copywriting –  it’s my job and I’m very passionate about it – but again, that’s not me.  I kinda feel like a cat with a ball of string – I grapple with it, but I couldn’t see myself doing it as the only writing thing ever.  And while both fulfil a lot of the time I spend online, they’re not the only thing I do.

I’ve started editing – which makes me an editor officially now.  I’m about to finish my second contract (probably today or tomorrow) officially, and I’ve edited for places like Scribe and Quill and other sites for years now.   But again, it feels kinda like my job, not my career – not to mention, to make sure that I help people with their books, my prices are tiny right now. I still love it, but it’s not something that I’m entirely interested in doing for the rest of my life.
I’m passionate about many things – mental health being key among them – WordPress being another one.   It’s important to be passionate, but passion, those passions, aren’t my core.  They colour what I do though, and that’s cool.

So, is my single strand my hobbies?  Photography?  Knitting?  Cross Stitch?  Gaming?  But, if I go into those, when I find that I’m bored of them, or I’ve perfected them, or I can’t ‘do’ them for any reason, then that might mean that I give in and have no single strand.

And that, your honor, is when we uncovered the vital evidence

Writing is at the core of almost everything I do.  Even coding when you look at it is writing of some description – but my passion – at the core of my being is writing.  Be it fiction or non fiction, I’m passionate about *books* and linguistics, and writing and … and… and…

My single strand isn’t so much a strand – it’s a sentence.
I am a writer.